The daiFPU is targeted to providing flexibility for the FPGA and ASIC technology used in satellite navigation and image processing applications. The key advantage is the ability to increase the actual functional density of the silicon used on board of satellites in the context of the actual on-board computations. This is done through allowing the user to parameterize the FPU at the synthesis time in a way to ensure the correct func- tion of the application while not using more resources than necessary. Classical FPUs used for example with the LEON processors are based on fixed data bus widths of 32 or 64 bits, often in situations where a reduced precision would be sufficient (e.g. 16 bits), also with operations that may not be used in their application. With the daiFPU the user can select seven major configurations (shown in the table below) at the synthesis time that support individual floating-point formats, their combinations, or packed floating-point formats. For each major configuration the user can specify whether floating-point division and square root should be supported. 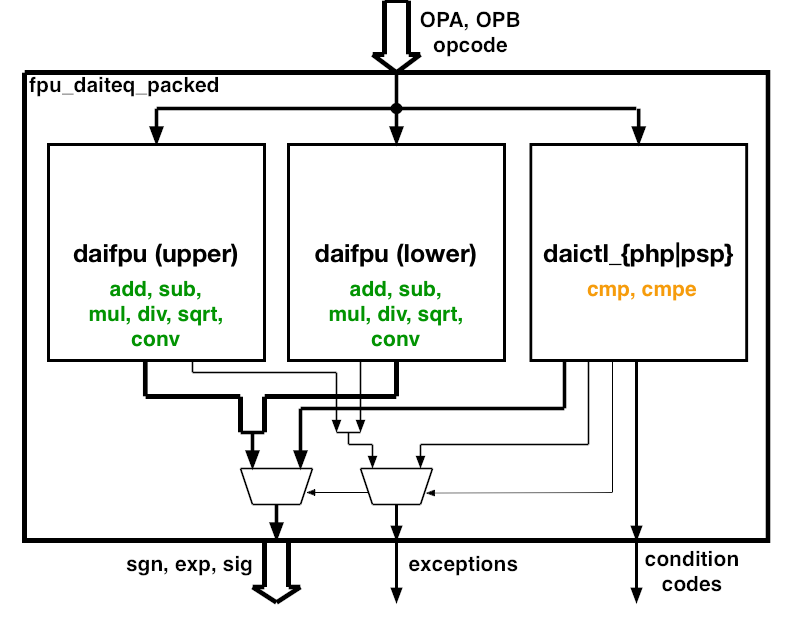 One-precision, packed format FPU - a configuration that supports packed and non-packed operations for one precision.

Validation of the daiFPU has been performed in these steps:

The daiFPU IP core is provided in the form of a synthesizable VHDL code or FPGA netlist. The IP core is available either separately or bundled together with the LEON2-FT processor. Deliverables include:

The IP core is guaranteed against defects for ninety days from the date of purchase. Thirty days of technical support over email and phone is included. Additional support and maintenance options are available.

The daiFPU is compatible with the following processors:

When used with LEON processors, the daiFPU is compatible with existing compilation toolchains in the configuration DAIFPU-DUAL-DPSP that supports the same floating-point operations as other common FPUs, e.g. Meiko or GRFPU.

Implementation parameters for common daiFPU configurations implemented in Xilinx Virtex7 are shown in the following table.

Implementation parameters for common daiFPU configurations implemented in MicroSemi PolarFire are shown in the following table.

Implementation parameters for common daiFPU configurations implemented in NanoXplore NG-Medium are shown in the following table.

The performance of the daiteq FPU measured with the Whetstone and Linpack benchmarks is shown in the following table.

The benchmarks were compiled to test computations in the three common precisions - double, single and half (or binary64, binary32 and binary16).

Values shown in italics correspond to floating-point computations performed in software using John Hauser’s SoftFloat library (release 3e) in daiFPU configurations that do not support the corresponding precisions in hardware.